To maintain compliance and safety for staff and patients in a variety of environments, it’s necessary to properly dispose of biohazard waste. This comprehensive guide will cover the different types of biohazard waste, along with the containers you should utilize for safe disposal.

The Definition of Biohazard Waste

Biohazardous waste is often defined as “any waste that contains infectious materials or potentially infectious substances such as blood.” Sharp waste is of particular concern, including needles, glass pipettes, blades, and other types of waste that could cause injury when handling.

85% of the total amount of waste generated in the healthcare industry is non-hazardous waste, while the remaining 15% is considered hazardous waste that could be infectious or toxic.

The Classification of Biomedical Waste

Biomedical waste is generally classified into two categories: regulated and non-regulated. Regulated medical waste has certain requirements for disposal that non-regulated waste doesn’t, helping ensure that all of this waste is properly disposed of to maintain compliance. 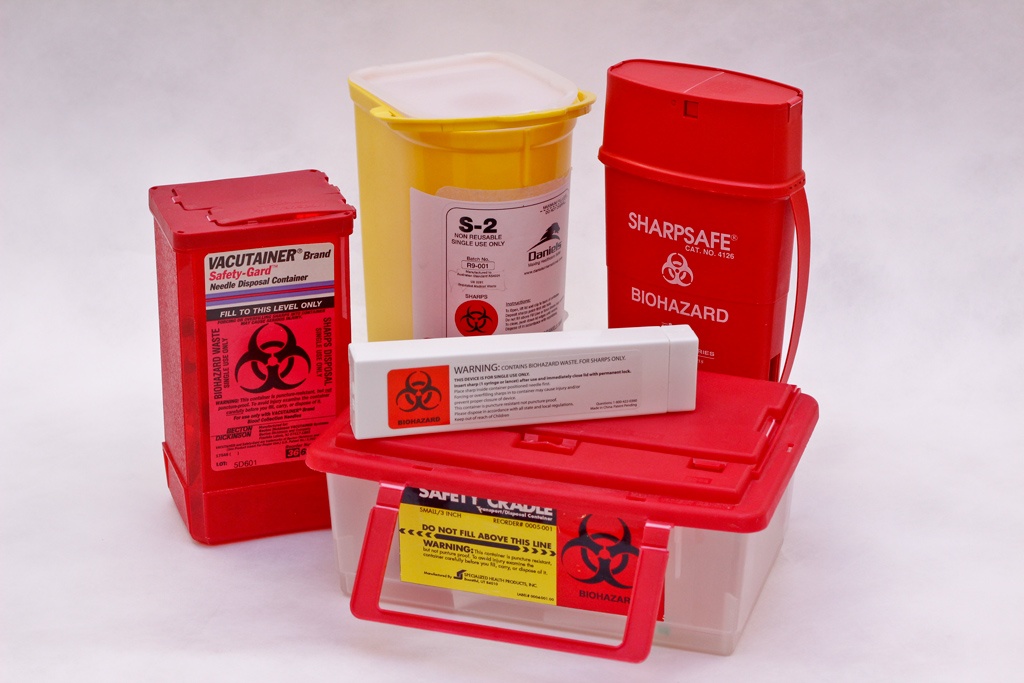 Regulated medical waste (RMW) includes two groups: biohazard sharps and biohazard waste. While facilities that generated RMW or waste disposal companies used to incinerate a majority of this waste in the 1980s, this practice has since been discontinued ever since it was found that incineration created toxic substances such as mercury and dioxin. These substances polluted the air and, to an extent, waterways. As a result, regulations came along in 1990 in the form of the U.S. Clean Air Act Amendments, which caused incinerators to become inactive while encouraging the use of other disposal methods.

Today, there are certain approaches that are used to properly dispose of regulated medical waste. These include enzymatic processing, irradiation, steam sterilization, and chemical disinfection, among many other methods that companies can use. The main advantage of most of these processes is that once the RMW is treated, it can be discarded in municipal solid waste landfills with non-regulated waste, preventing the need for segregated landfills.

Vendors that remove RMW from facilities typically charge based on the weight of the waste. Heavier biohazard bags and sharps containers will ultimately lead to higher costs. In fact, sharps waste can potentially cost as much as eight times more to dispose of than non-sharps waste. This makes it important for individuals to make sure that they don’t dispose of items in receptacles where they don’t belong. Hazardous landfills also have more stringent requirements regarding volume, because of the need to prevent harm to the environment.

Non-regulated biomedical waste doesn’t need to adhere to these disposal methods. These items can include items that aren’t visibly contaminated such as gloves, pipettes, gauze, or lab coats. Urine is also not considered regulated medical waste in most states unless it appears bloody or if it’s known that it contains blood.

There are many different types of biomedical waste, including:

How is Medical Waste Disposed?

There are several methods of treatment used prior to the proper disposal of biohazard waste, based on the type of waste that requires disposal. Once these treatments are applied, waste is typically disposed of in a landfill after it’s deemed non-hazardous.

One common method of treatment before disposal is incineration, which involves the application of high temperatures to waste that kills all organic contaminants including viruses, bacteria, and other types of pathogens present in the waste. Once this treatment is applied, the waste is normally turned to ash and gas that requires further cleansing prior to dispersal into the environment.

Another potential treatment is autoclaving. This process involves the use of a highly-pressurized and steam-heated chamber that sterilizes various types of biomedical waste. These devices are also used to sterilize different kinds of medical supplies. Autoclaves can also melt plastic and other items to help make sure all pathogens are removed, enabling them to be repurposed as new products.

Bleach is another material often used for the treatment of biohazard waste. Bleaching uses a variety of chemicals such as those found in chlorine to start a chemical reaction with biomedical waste that makes them gain or lose electrons to cause a chemical change that renders the waste non-hazardous.

This is a service offered in funeral homes that serve as an alternative to cremation and traditional burial. This treatment helps reduce carbon dioxide and the emission of pollutants that result from the other two processes.

Biohazard waste requires proper treatment and disposal to avoid various types of contamination, whether chemical or biological. Improper disposal of biohazard waste could have detrimental effects on the environment and potentially pose a threat to the general population. This makes it necessary to ensure that all potential contaminants are eliminated via one of the treatments listed above, along with disposal in a landfill or repurposing only once all biohazards have been removed.

There are many types of facilities that generate biohazard waste, which will require sufficient treatment and disposal based on the type of hazard present. These facilities include:

Biohazard waste may also be found at scenes of violent accidents or crimes.

Depending on the type of waste, there are reusable and disposable waste management solutions available. Some items such as medical devices made of plastic or other meltable materials can be reused once sterilized and otherwise fully treated. Others will require complete disposal once treated, but each method comes with its pros and cons. There are several upsides and downsides to each reusable and disposable waste management solution.

Some of the benefits of reusable waste management solutions include:

However, there are certain disadvantages that may come with reusing supplies, including:

Containers for Disposing of Biohazard Waste

Depending on the type of waste, there are specified containers that facilities must use to store biohazard waste, with containers intended for both sharp and non-sharp waste, along with non-hazardous waste.

Sharps are stored in durable tamper-proof and puncture-proof containers, which are typically made of metal or thick plastic. Overfilling needs to be avoided, which means that facilities should remove containers once they are three-quarters full.

Sharp hazardous waste can include:

Non-sharps and solid biohazardous waste are collected in leak-proof and solid-walled containers, which are lined with a plastic coating or an autoclavable biohazard bag. All containers must have lids and display the biohazard symbol, while remaining closed when not in use. Containers for bench-top materials that don’t have lids must have bags that remain closed when not in use and must be transferred to the floor container once ready for disposal. When being transported to an autoclave, bagged waste should also be stored in secondary leak-proof container to prevent any leakage if the bag is ruptured at any point.

Biohazard contaminants left behind in any location can pose a threat to personnel and the environment. Even under the most ideal conditions, contamination can be present in a facility, with contaminants present on metal surfaces, pails, cans, or reprocessed bins.

These containers are made of sturdy paperboard that’s coated with a plastic lining to prevent leakage. They’re available in several different sizes depending on your disposal requirements. Use our Biohazard Bench-Top Keepers to store non-sharp items such as petri dishes, test tubes, swabs, and more. All containers feature secure self-locking tops and a biohazard symbol. Simply autoclave all materials inside of the container and/or dispose of it in adherence to state, federal, or local regulations.

This floor-model container includes a corrugated container that’s lined with a leak-resistant 2 mil plastic liner. You can reclose the lid to eliminate mess and odors. You can also dispose of large items or entire racks of supplies with the large opening. All containers feature the biohazard symbol and contain bilingual warnings in English and Spanish.

Our Broken Glass Keepers are available in both floor and bench-top models and allow for the safe disposal of broken glass that’s non-hazardous. Each container features broken glass symbols and can help prevent injury by separating sharp glass from non-sharp waste.